If you have been following along with Part 1 and Part 2 of this mini-series you should now have a basic Android application which displays your current location on a map. Not amazing functionality I’ll admit but the basis for many location based applications in the Android Market. What will make the application truly useful is the ability to add markers at specific locations, e.g. points of interest, cash machines, checkpoints etc. While this installment is about how to display the markers at the appropriate map locations it will not cover how that location data is obtained. In some cases it may be possible, although unlikely, to hard code the locations into the application itself. Alternatively the data may be provided via a webservice of some description and that data may or may not be persisted in the built-in SQLite database (as it is in my application). For the purpose of this exercise we’ll be hard coding the data in the application.

When I started my application this was the part I found the most frustrating, mainly because there was so little information out there and what there was seemed over complicated, poorly presented and (as it turned out) not very efficient for my requirements, i.e. the map took far too long to render. The reason for this was that most of the blog posts were advising that using ItemizedOverlay was the way to go. I duly followed along and had my application working – but it was too slow to be usable. Adding some debug output I could see that it was taking about half a second to plot each point and I had over 600 of these so I’m sure you can do the maths on this and see my problem.

Now it could well be that I had an issue with my code (although I had followed the process described in numerous blog posts) and before everyone starts adding comments that I must have been calling populate() too often I can assure you i was not. I have subsequently read that ItemizedOverlay is only really suitable for ‘a dozen or so’ items and that performance degrades significantly as the number of items increases – that was certainly my experience.

The solution I’ve adopted is to create an overlay class which extends Overlay instead of ItemizedOverlay and as ItemizedOverlay itself also extends Overlay all I’m doing here is cutting out the middleman. As we start to add code to this class it will be necessary to import a number of namespaces and for the sake of brevity I will assume that you are comfortable with doing this. If not then don’t panic, the final class code will be provided within the article and of course within the project download for this installment.

With the project open in Eclipse

In the resulting ‘Java Class’ dialog specify a suitable name for the new class, I’ve used DemoOverlay, and replace the default Superclass value with com.google.android.maps.Overlay. 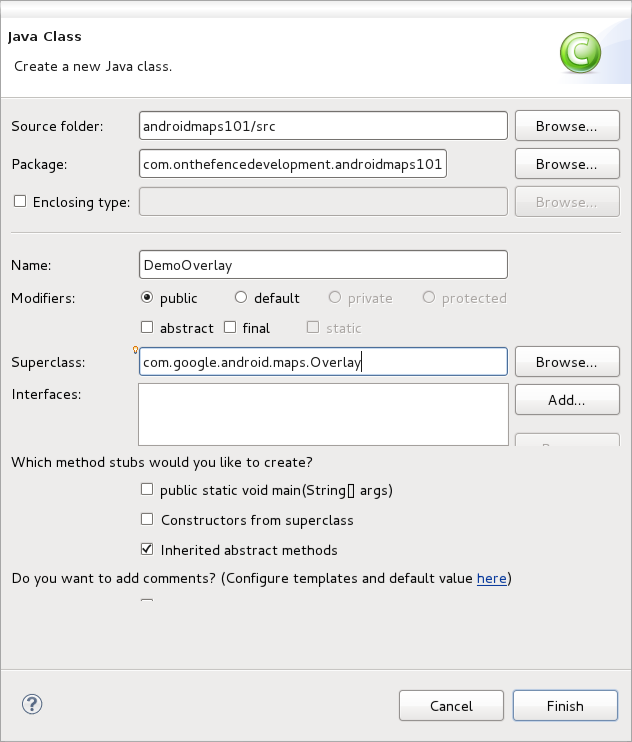 Eclipse will now create a template class ready for our code. Position the cursor between the curly braces and press CTRL+SPACE. This will bring up a list of all of the methods of the Overlay class that can be overridden. Scroll down to the draw method which takes three parameters (context, mapview and shadow) and press enter – Eclipse will now create a method stub with the appropriate signature.

Our code is going to start after the call to the superclass and the first thing we are going to do is to obtain a reference to the MapViews Projection object. The Projection object translates between on-screen pixels and latitude/longitude pairs and is obtained with a single line of code:

Next we need to determine the latitude/longitude range of our screen, i.e. where in the world we are looking and how much of it we can see.

The first three lines call on the MapView methods to obtain the central latitude/longitude and the screen width and height in terms of longitude and latitude respectively. The next four lines calculate the coordinates of the edges of the screen in relation to the map.

The reason we have done this is so that we can determine whether or not to add a particular marker to the overlay or not – there is no point adding it if it will never be seen and it will only waste resources if we do.

As already mentioned, I’m not going to cover how the location data is obtained, stored or retrieved so I’m going to hard code it for the sake of this exercise. So, add the following method which will return a single GeoPoint for an as yet unknown location 😉

Now we can declare and instantiate a GeoPoint variable by calling the method from within our draw method. Add this just after the calculations for the screen boundaries.

Now that we have our GeoPoint we need to determine if it is visible within the part of the map displayed on the screen. This is a simple matter of comparing it with the values we calculated earlier:

At this point Eclipse will complain about the R.drawable.markerblue argument we used when declaring and instantiating the marker bitmap. This is because it does not exist in the project yet. You can download it from here and save it to a folder called drawable within the res folder of the project (if the drawable folder is not present in the folder structure then just create it). You may have to refresh the project afterward by right clicking on it in the Package Explorer and clicking Refresh.

We are done with this class now so close it and open the OpenMap.java file we created in part 1 and enhanced in part 2. Within the onCreate method add the following two lines at the end.

These simply create a new instance of the overlay and add it to the MapView overlays collection.

We can now run the application and see where in the world we have placed the marker. 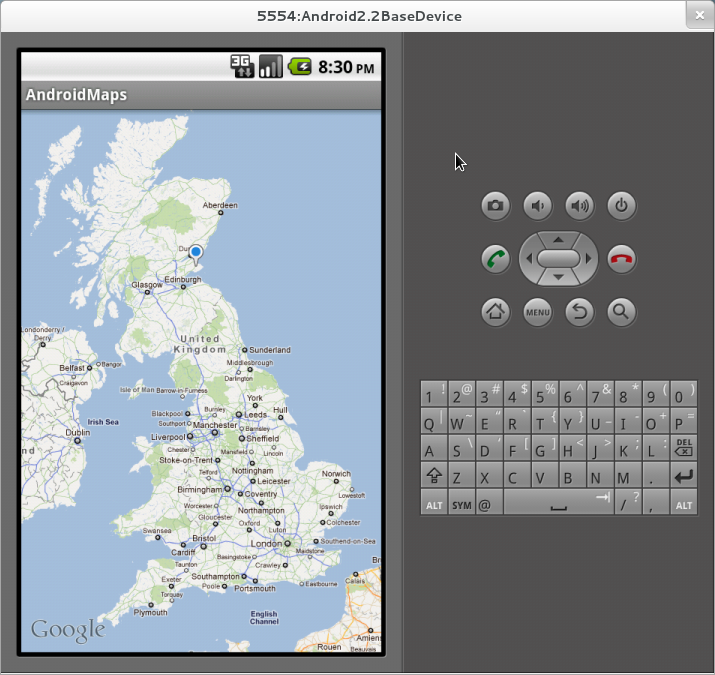 If you pan and zoom into the marker location you will see that it is located in the East of Scotland at what appears to be quite an uninteresting location – but it is actually Scotlands Secret Bunker, which is of course not much of a secret anymore 😉

So what have we done here? Well, in just over 50 lines of code we’ve created an overlay class which will add a marker to a map surface using latitude/longitude coordinates. Ok the class is a bit contrived with a hard coded location but it can easily be extended to create markers for a collection of locations, bearing in mind that only those that fall within the viewable area of the map will be rendered.

Click here for the working project for this instalment, remember you’ll need to add your Google Maps API key.

If you have any problems with the project or notice something wrong with the code or the blog post then please leave a comment to let me know.

Where to next? Well, having locations on a map is one thing, but dropping a marker on a map is only part of the story – what we need to do next is allow a user to tap on a location and have additional information about it displayed on screen. That will be the subject of part 4 of this min-series and will probably hit the blog in the New Year.