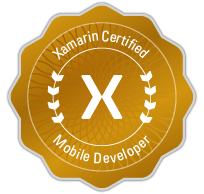 I first passed my Xamarin Mobile Certification back in June 2014 but when it came to taking the recertification exam the following year I never quite got around to it. Ultimately it lapsed and I while I was no longer certified I did keep my University subscription running so that I could keep my skills up to date.

During the next year I have to say that I was quite disappointed as there didn’t really seem to be any new content, i.e. no new courses were added as far as I could tell. At the end of that year I was considering not renewing my University subscription, at $1500 it was not exactly a no-brainer. Then Xamarin was bought by Microsoft and it was included in the MSDN subscription, effectively saving me $2000. With the promise of new content I decided to renew my University subscription – I was $500 up anyway so why not I thought.

Well, as promised, new content is being added, a handful of Azure courses and one on Xamarin.Forms custom renderers so far. That and the fact that I’m currently engaged as a Xamarin developer I thought it would be prudent to refresh my certification. That, coupled with the fact that the Certification and Recertification exams are to change on 15th October this year meant I had a definite timeframe.

Xamarin list 10 courses as being required knowledge for the recertification exam so I spent a couple of weeks reviewing these – making notes and doing the exercises – before embarking on the exam.

The exam itself is 100 multiple choice questions which must be completed within three hours. The pass mark is 80% so not a lot of wiggle room here.

During the exam itself there were a few, shall we say, curve balls – questions which, to me, seemed quite ambiguous. One mentioned an image which was not present resulting in me having to guess the correct answer based on the text – which proved unsuccessful as it turned out – it was in the list of incorrect answers. If I’d missed the 80% by a single mark I don’t think I would have been too happy. As it was I passed with a score of 87% which I’m pretty happy with.